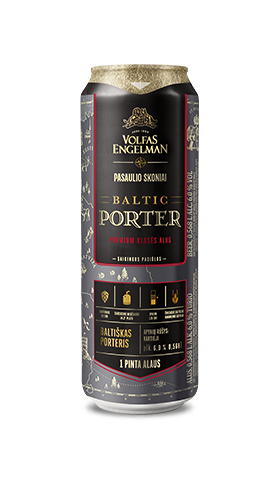 FLAVOURS OF THE WORLD - „Baltic Porter“

Baltic Porter is known in the world as the only bottom fermentation porter. It is a dark mahogany beer with a thick foam, a slightly noticeable sweetness of roasted caramel, which is completed by a note of delicate bitterness.

Historical background: In the 18th century, Imperial Stouts exported from Great Britain were popular in the lands around the Baltic Sea. Analyzes of this beer were then developed in local breweries, using local raw materials and adapting the brewing methods used in them. This is how the Baltic Porter appeared.

Wolf Engelman Brewers revived this recipe in 2019, first appearing in a 0.75L glass bottle. The taste was highly appreciated by beer lovers, so now we present it in the most popular 1 pint can.
We recommend serving refrigerated to 12-16 ° C

New Flavours of the World